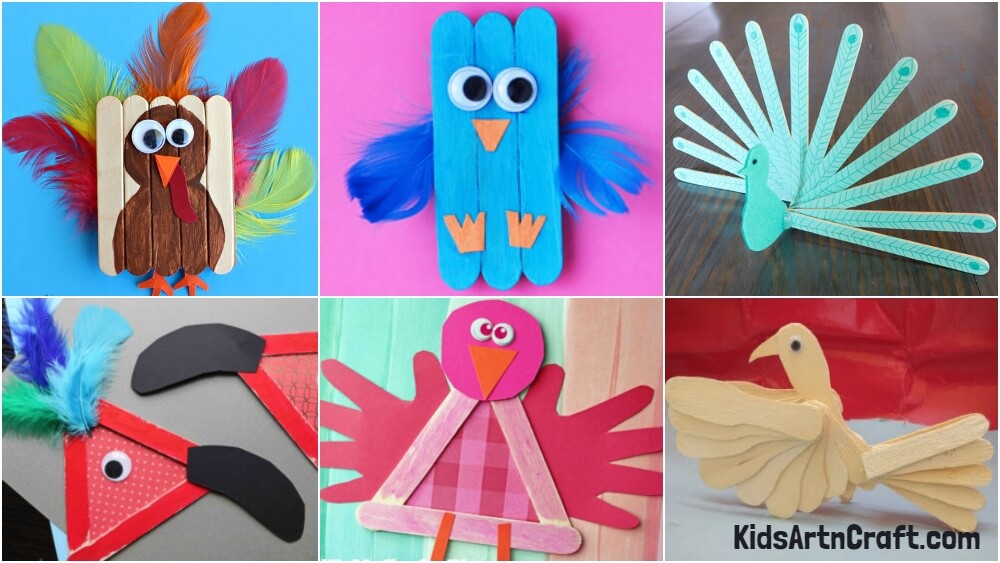 Birds are flying creatures that attract us from the very beginning of our understanding of the world. Children, kids, and even the elders share a keen interest to fly. This flying attracted humans so much that artificial birds like airplanes are also invented. Using popsicles to make these below-made crafts can be really exciting and creative too. The basic requirements to make each of the crafts are popsicle sticks, colored feathers, 3d eyes, painting colors, pompoms, decorative stones, foam sheets, and origami papers of different kinds as per needs.

Utility of the craft: The same designed birds in a cluster can be used as wall decor or as wall hangings as well. These can be used as props/ tools for the kids’ education and they can also be gifted to kids as a token of appreciation as well. Birds are more like free- spirits without any boundaries, which attracts positivity and creativity to our life, which can be taught to children of any age.

Don’t skip the craft, read it until you reach the ending part… I have mentioned the amazing role of birds/peacocks in our day-to-day energy vibes. 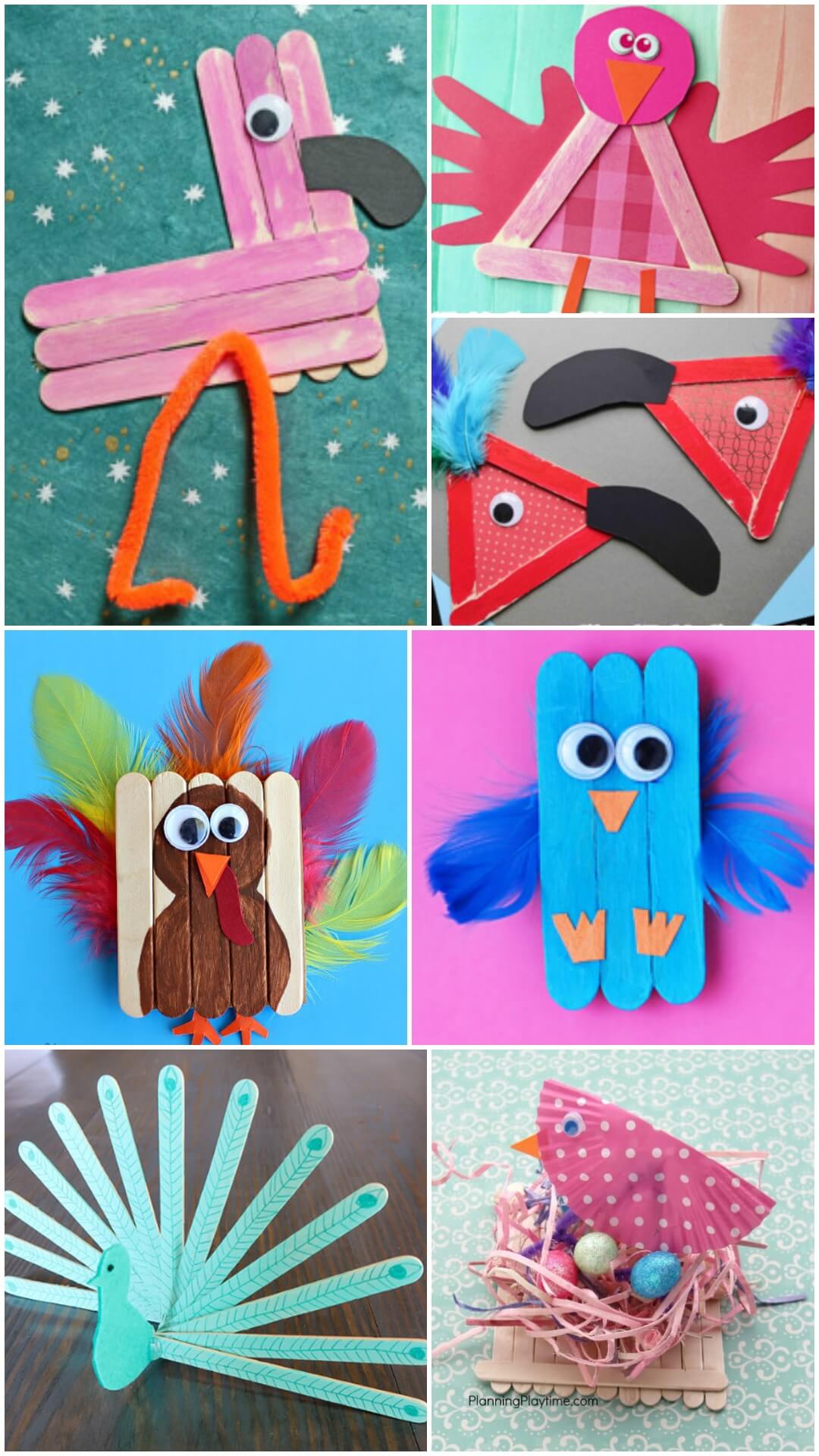 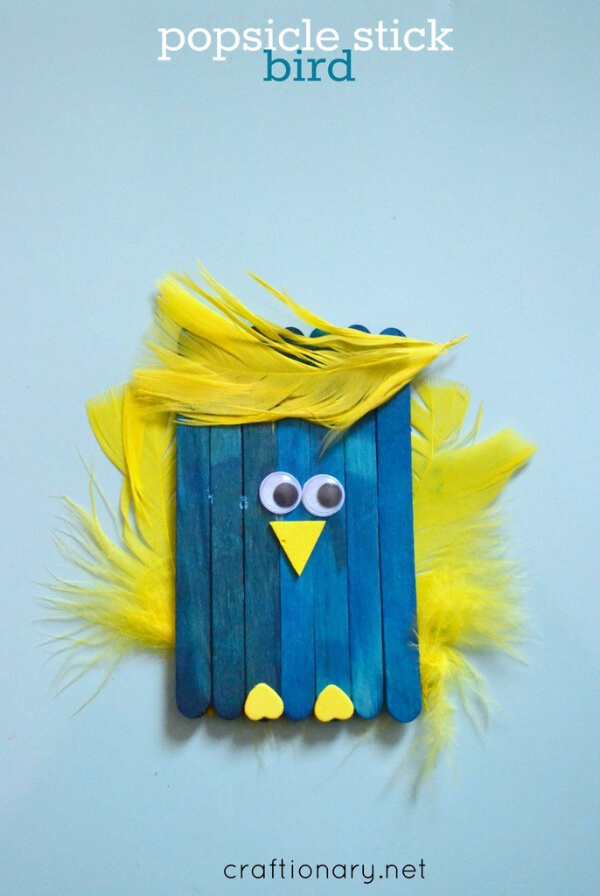 Procedure to make: Take seven popsicles and color them blue. Paste the popsicles as shown in the image using a base as paper or a slightly thick sheet irrespective of any color. Arrange yellow feathers as shown. Cut two small heart shapes to make the feet of the bird. Use the same foam sheet to make the nose portion(make a triangle).

Learning: knowledge about feathers and their creative use, ways to use foam sheets. you will be able to make a cute bird for yourself. 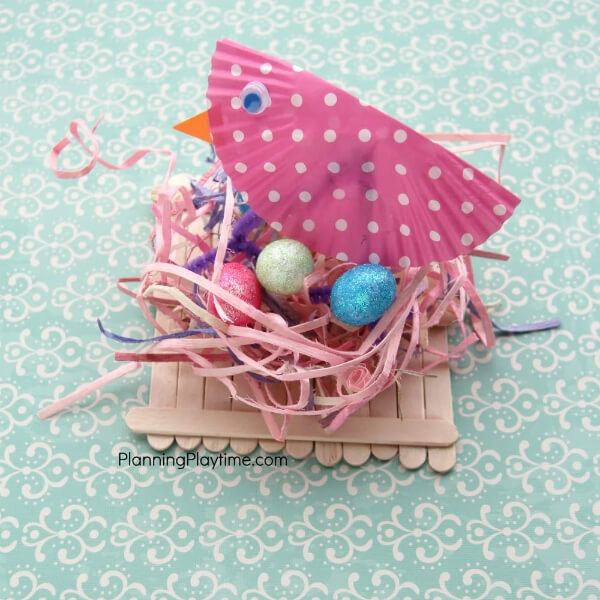 Procedure to make: Use a designed pink crepe paper or an origami sheet and cut into a circle paste two 3d eyes to two sides of the folded circle. Cut an orange origami/ crepe paper into a small triangle and paste it near the eyes portion making it look like a beak. Use a few brown, skin, and purple/ blue colored sheets and cut them into thin thread-like pieces, or use the machine to cut these sheets into these thin lining sheets, making them like the nest as shown in the image. To settle the best make the base using the popsicle and systematic arrangements of that too as shown in the image.

Learning: different methods to use crepe papers or origami papers and effective use of thermal balls as the eggs, and it’s a creative way to teach a child that birds do give birth and that too lay eggs… cute display of bird life can also be seen in this craft. 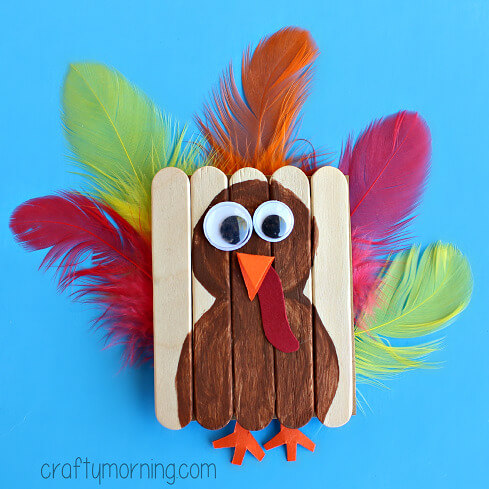 Learning: the triangle, the warm shape, and the feet shame make the child understand the different body structures and amazing crafty products. It develops the observation skill and identification of shapes. 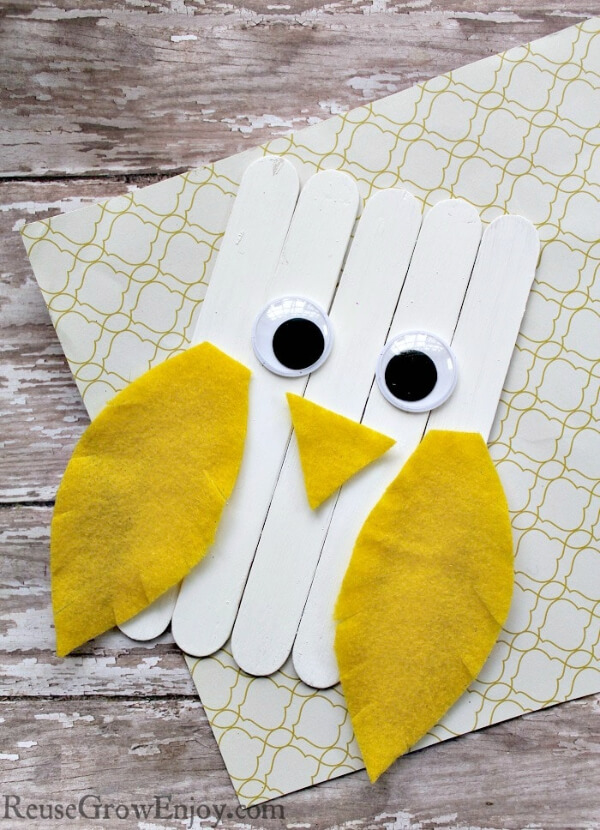 Procedure to make: Take, arrange, and paste five popsicle sticks as shown in the image. Use crepe paper/ origami sheet/ tissue paper to cut the nose and the wings portion of the bird and then paste them taking the reference to the image. Well, don’t forget to paste the 3d eyes.

Learning: You learned a new easy way to present a basic bird to your kid or yourself whenever in any need. develops cutting skills along with color knowledge if you prefer changing the color of the wings and nose as per your choices. 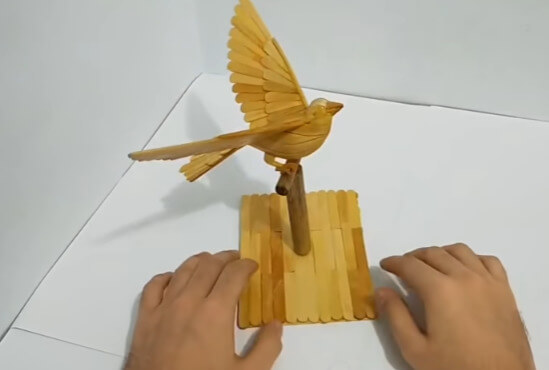 Procedure to make: Draw the reference beginning of the bird then paste the popsicles based on the reference structure. Wet the popsicle in water or the special smoothing serum shown in the video so that folding and pasting turn out to be easy for you. By frequent pattern arrangement and folding those wet popsicles generate the 3d wooden body of the bird. Similarly, make the wings and tail using different arrangements. Well, remember to glue them properly and with a specific alignment as shown in the video.

Be careful while using the cutter and the specialized glue i.e. cyanoacrylate adhesive as both these products have been used as per their requirements and your abilities to fix the popsicle sticks. From the very beginning of this craft make the basic structures using pen and paper. Use the paper as a reference during making different portions of the bird’s body.  The folding and cuttings can be really exciting but don’t forget to watch the video as then make it.

Suitable age group: more than 12 years of age children and kids can try making it with the guidance or assistance of elders or elders can make and they can only see it. The adults can make it on their own.

Learning: Making a 3d bird and using it as per the maker’s preferences. Knowledge about a new kind of glue, and a nice technique to soften the popsicle and it’s an amazing way of formation. 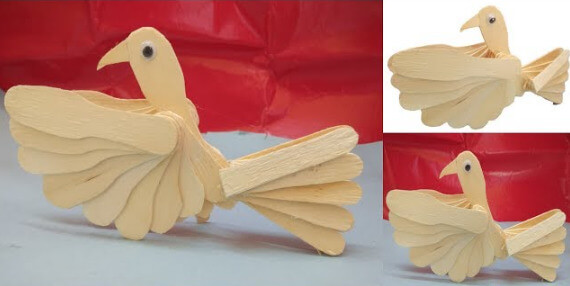 Procedure to make: The basic idea to start and complete the craft is visible in the image. Use a popsicle stick as a reference and paste two eyes to both sides, cut a beak structure from any of the popsicles you have, and paste it in the apt place required. Arrange the other popsicles to form the wings and the tail of the bird as shown in the image. The bird is ready. 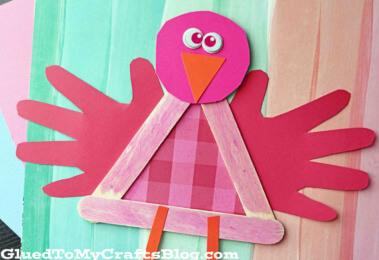 Procedure to make: Take three popsicles to arrange them into a triangle and repeat the same with another three popsicles. Paste the triangles to two different/ same colored sheets to make the body of the valentine’s card people. Draw, cut, and paste two circles toward one corner of each triangle. Pate 3d eyes and cut, and paste the nose portion along with four kids’ printed hands so, as to complete the love birds card.
Learning: You learned to make lovebird cards for the occasion of valentines day, anniversary, or just as a craft piece. Develops shape knowledge along with coloring skills, color identification, and amazing ideas for further use. 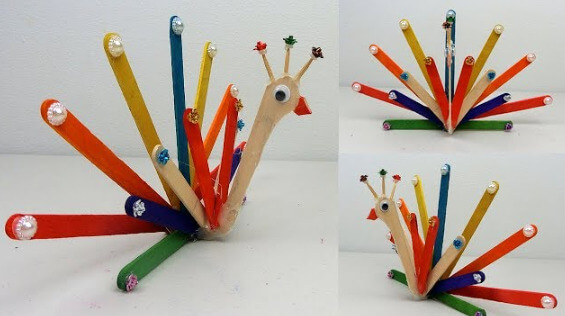 Procedure to make: Close observation of the image can make it easier for you to make it. Outline the face structure of the peacock, paste the beak and the three crowning sticks as per your preference, and paste the 3d eye at its position. Use colorful popsicle sticks to arrange and paste them to make a clear dancing peacock as shown in the image.  Don’t forget to add some pretty decorative stones to the time of each popsicle as shown in the image.

Learning: Easy way to make popsicle dancing peacock, different color understanding and recognition. another skill of developing something new out of popsicles. 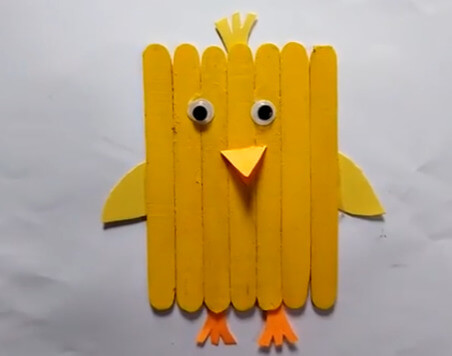 Procedure to make: Paint and paste the yellow popsicles as shown in the image. Cut and paste yellow small wings and hair strands along with the nose (kite-shaped structure; fold into two triangles with the same base). Use an orange sheet to make the feet and then paste it too. 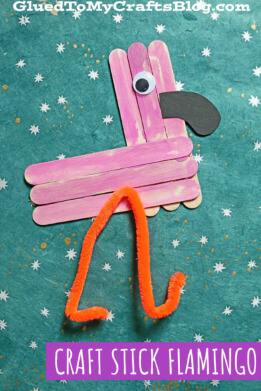 Procedure to make: Collect 2 sets of 6 popsicle sticks. arrange 3 popsicles vertically and the other three horizontally towards the edge of the other set. Be careful while setting the popsicles (remember to set them in an ‘L’ shape, if you are making it as a pair don’t make the mistake of repeating the same ‘L’ shape and making it an inverted ‘L’ shape). Use black paper/ stick to make the beak of the flamingo. Remember to paint the popsicles with pink color(you can use paint color/ crayon color/ pencil color as per your preference). Paste the 3d eyes. Use orange woolen thread/ straws to make the feet of the flamingos.
Learning: The basic idea of a bird-like flamingo will be added to the knowledge and a creative way of presenting it can also make nice sense to your organs. 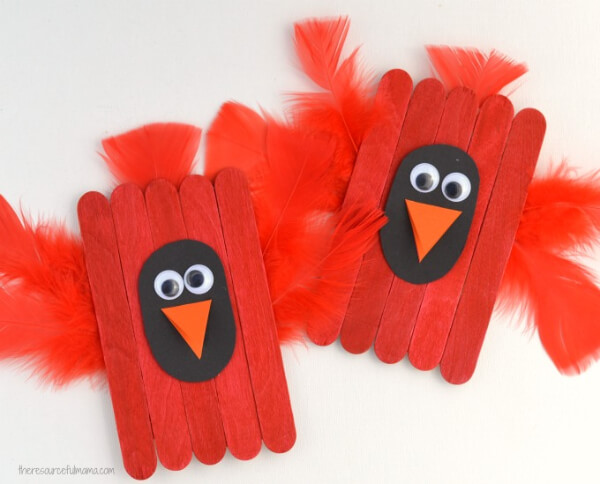 Learning: Redbird is also called a Northern Cardinal when searched on google. Even Angry birds have this kind of image too. It clearly states the presence of this kind of bird and knowledge about this bird will add to the general knowledge of the child. 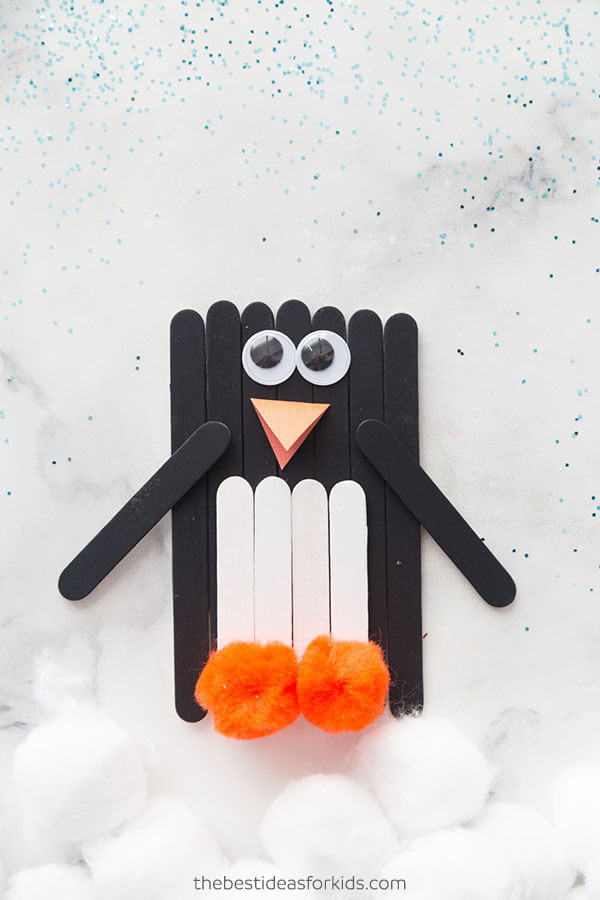 Learning: Children will know bout the identification criteria and color combinations to make the penguin and also know about a bird without a wing but still a bird it is i.e. it’s a penguin. Recognition of colors for kids. 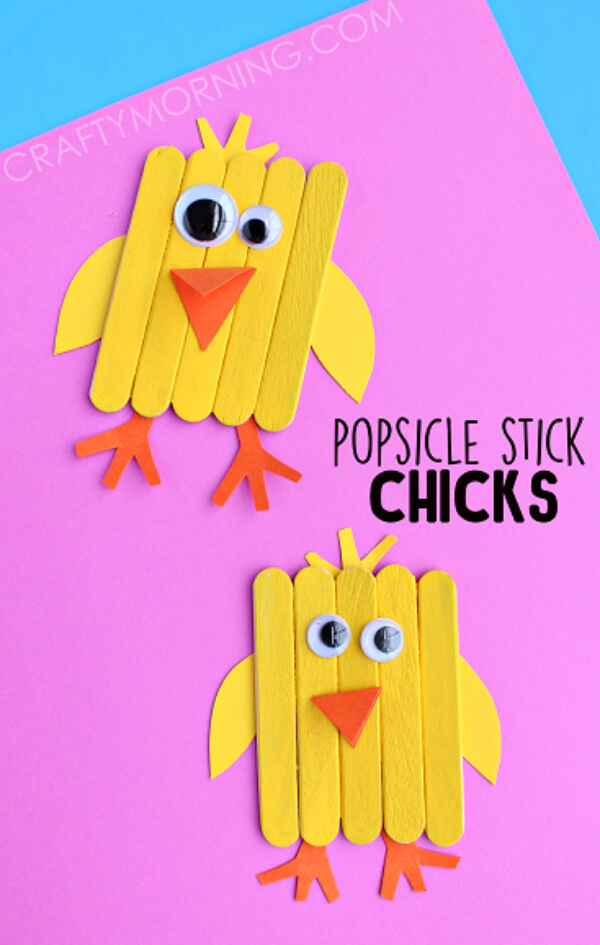 Procedure to make: Paint the popsicle with yellow color and paste it as shown above. Use orange origami paper to make and paste the nose and feet of the bird. Paste 3d eyes on the stick, yellow color wings, and hair strands; using the reference given above complete the arrangements to make the chicks. Interestingly both the chicks can be made with the same procedure just by changing the 3d eye size and a few more changes can be made by the maker as per his /her choices.

Learning: Children will know about the structure and the identification of chicks as birds i.e. babies of chickens. And that chickens are these birds that we consume someday may be… Develops color identification too. 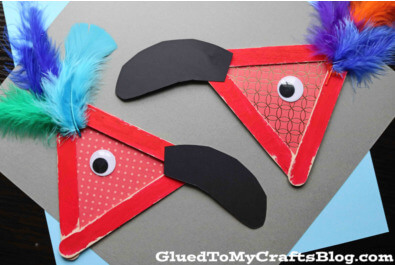 Procedure to make: Collect a few feathers of red and green color. Take three popsicles arrange and paste them into triangles. Paste the triangle stencil to the red sheet/ white sheet(color it red afterward). Paste 3d eyes and a black beak. Lastly, paste the feathers completing the peacock head.

Learning: Parrots are considered to be green in color but there are some parrots with red heads and green bodies. Sometimes this red part is only on the cheeks/ foreheads of some parrots based on their species and availabilities 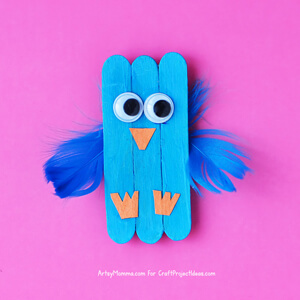 Learning: It would be really exciting to know that there is a bird with this name i.e. Bluebird found in North America as per research.  Recognition of the blue color and its importance also can be taught to the kids. 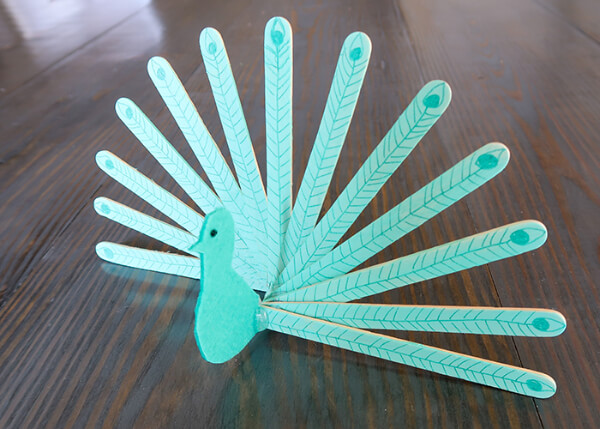 Learning: Peacock as a bird is really beautiful and it’s the peacock who dances in the rain and its male partner. The female is considered as ‘peahen’ technically. The peacock represents both males and females which can be considered a mistake as well.

Suitable age group: All the above-made crafts are age specific as the making process includes scissors, cutters, and glues along with watercolors and pencil colors. Kids below the age of 12 years should make these under the guidance of their elders and those above 12 can make it at their own risk. Before 10 years of age, kids can make these products or can observe their elders making them develop their observation skills and attain new ideas.

Peacocks or any bird represent the free spirit and good and positive vibes only along with an aesthetically active mood. According to Vastu-shastra, parrots should be placed in the NORTH/ NORTH-EAST direction, peacock encourages success and power in life. Avoid caging the birds. It is an excellent form of crafty learning for all age groups, i.e., students, teachers, parents, and even entrepreneurs. These designs and beautiful crafts are a treat to your sense organs. Try it and also appreciate or comment on it if you find it helpful and interesting which helps in different means of utility as well. 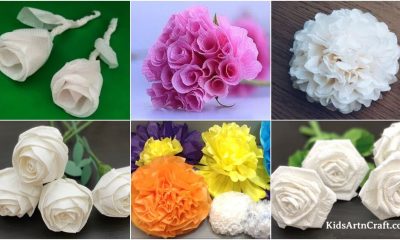 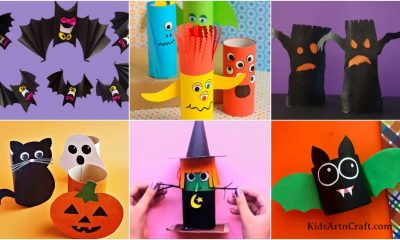 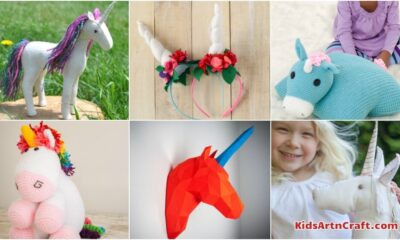 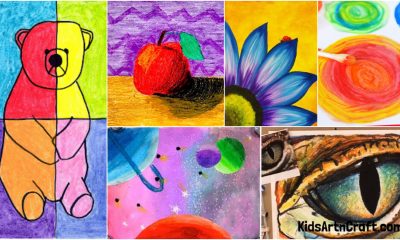 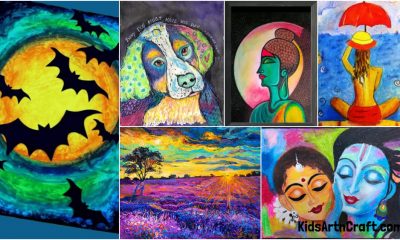